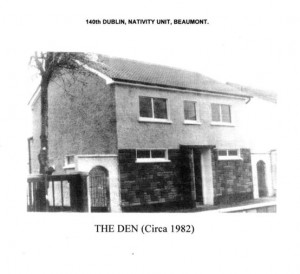 BRIEF HISTORY OF THE 140th (Up to 1982)
ON a bitterly cold Sunday afternoon on 19th February 1978 a meeting, organised by the then Parish Priest, Father Ryan, was held with a view to starting a Scout Unit in our Parish. Scout officers from National Headquarters were there to address the meeting. Such was their enthusiasm and optimism that before the end of the meeting some of those present had timidly raised their numbed hands and before they knew where they were, found they had volunteered for either the Unit Council or the Fund Raising Committee.

The first Unit Council meeting was held on 22nd February 1978 and at that meeting the name of the new Unit “The 140th Nativity Unit” was chosen, and also the neckerchief colours of orange with green border. Application was made for facilities in St. Fiacra’s School and when these were made available, we were on our way. The Unit was started with 15 scouts. I wonder how many can remember the first Investiture on 28th May, 1978 ? What a wonderful day that was. Even though the Unit was only three months old, it already had its own Flag for the occasion. Hearts beated fast, shoulders automatically straightened and many a proud tear was surreptitiously wiped away as the scouts went proudly up to the altar to take the solemn Prom­ise and receive their neckerchiefs and hats.

A tremendous Fund Raising Committee had swung into action from their very first meeting and they had organised a most enjoyable reception after the ceremonies in the church. The impetus of those early years had continued over the past four years. The Fund Raising Committee have had many enjoy­able functions. The Scoutalong, with the scouts cooking and serv­ing sausages and burgers with grease, grease, and more grease, all great fun! There was a Sale of Work and Cake Sales, etc. There were Race nights, Pick-a-Team Cards, Raffle Tickets—all to raise a few bob. The Unit took part almost immediately it had been formed in the Bob-A-Job and there was even an Annual Camp that first year. Membership reached 200 in the Scout Troop along with two fully functional Cub Packs and a Venturer Unit. There was swimming every Fri­day night and the Scouts took part in all the Regional and National activities and competitions. A Cub Pack Holiday every year, an annual Scout Camp and a fully equipped Unit. Not bad for a few short years!

Even in the early stages it was obvious that the existing facili­ties were not suitable for scouting purposes and the idea of the Den was born. Everything then was geared towards that end.

From these humble beginnings emerged the strong Unit of to-day ending in the culmination, with the combined efforts of Leaders, Committees members, Parents, Fundraisers and a lot of hard work with -THE 140th SCOUT DEN.

This website uses cookies to improve your experience while you navigate through the website. Out of these, the cookies that are categorized as necessary are stored on your browser as they are essential for the working of basic functionalities of the website. We also use third-party cookies that help us analyze and understand how you use this website. These cookies will be stored in your browser only with your consent. You also have the option to opt-out of these cookies. But opting out of some of these cookies may affect your browsing experience.
Necessary Always Enabled
Necessary cookies are absolutely essential for the website to function properly. This category only includes cookies that ensures basic functionalities and security features of the website. These cookies do not store any personal information.
Non-necessary
Any cookies that may not be particularly necessary for the website to function and is used specifically to collect user personal data via analytics, ads, other embedded contents are termed as non-necessary cookies. It is mandatory to procure user consent prior to running these cookies on your website.
SAVE & ACCEPT